The closed nuns guard with fear the secrets of this clerical building that in times of the Civil war turned into asylum of republican refugees. This convent Dominican is original of the 16th century it was built to instances of a local marriage, which it is representing in the picture of above of the altarpiece of the high altar. In the Chapel of the Virgin of  Rosario paintings attributed to Josep Renau, father of the famous artist. The church is the only area visited. 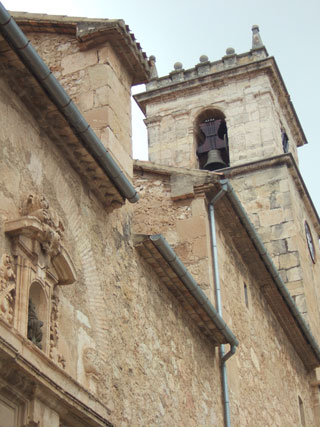 Church of St. Bartholomew the Apostle

Church of St. Bartholomew the Apostle

Sober and discreet in its exterior, the interior however, the Valencian Baroque style xurrigueresc invades the altar. temple, originally Renaissance style, seventeenth and eighteenth century it acquired the present baroque appearance.
On the other hand, there are also the municipal shield and a pin in it. A tool that thought gave the name to the town, which symbolizes the craftsmanship of the grass that was made from old this population.

More than four centuries remained active in this building that used the Font Jordana water for energy and grind wheat and corn. From the fifteenth century until the 80s of the twentieth century Flour Mill maintains its original function. Today it is a restaurant and rural housing, and on the ground floor has a visitable museum where it remains part of the original mill machinery.

From the Font Jordana, a rise of ancient cypress trees reaches the shrine at the foot of the Sierra de Agullent, and where each first friday of September, hundreds nocturnal rise in pilgrimage. Built in the eighteenth century, the chapel has at his side a retreat house, a shelter and a home restoration space.
The dedication to St. Vincent Ferrer, both common in the Valencia region, Agullent acquires special significance because not only visited these lands in life, but in 1600 was commissioned to deliver to the residents of the pest, as tradition tells local.

Well of small dimensions, recently restored and open to visitors, is the testimony of an economic activity extinct: the trade of snow. Topped with a vault, is listed as one of the 137 surveyed cavas Southern Betic sector. Its activity was strictly local, without being involved in large-scale marketing. According to the official chronicler Agullent, the oven was already built in the late sixteenth century, then collects municipal documentation application snow Ontinyent in Agullent as therapeutic remedy for the epidemic of plague that were suffering.